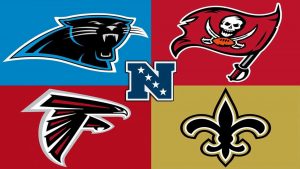 Day seven of the “Division Prediction Marathon” brings us to the NFC South which includes the Tampa Bay Buccaneers, New Orleans Saints, Carolina Panthers, and the Atlanta Falcons.  This division is loaded with four teams that truly hate each other.  These teams play each other with intensity and over the years it is plain that whatever the records, anything can happen.  With that being said, let me present you with my prediction for this division.

Tampa Bay Buccaneers – Tom Fucking Brady…  The goat will play his third season as QB of the Bucs, and at 45 years old he is showing NO signs of slowing down.  He has talent around him with Mike Evans and Chris Godwin, Leonard Fournette and new addition Julio Jones.  Supporting cast includes Scotty Miller, Breshad Perriman, and TE’s Cameron Brate and Kyle Rudolph.  The only weak spot I see with the Bucs is their offensive line.  the injury bug has hit this team pretty hard including center Ryan Jensen and Guard Aaron Stinnie leaving a gaping hole in the center of the offensive line.  History has shown that Brady’s greatest weakness is teams applying pressure up the middle of the OL.  With that being said if there is any kink in the armor of the Bucs, it will be there.  they have a solid defense, lead by Shaquil Barrett, Lavonte David Will Gholston, and Vita Vea.  I feel the defense will play a bigger role in how successful the Bucs are this season.  Despite all of the improvements and additions made by their biggest rival, The New Orleans Saints, I still think that the Bucs will win the division.

New Orleans Saints – The Saints welcome back Jameis Winston at QB after missing most of last year due to injury.  he has performed well during the preseason and it is this fan’s belief that he will have a breakout season, perhaps even winning comeback player of the year.  Surrounded by plenty of key players, including the return of of Michael Thomas, coming off of injury, and new addition Jarvis Landry who was the emotional leader in Cleveland while he was there.  add to that RB’s Alvin Kamara and Mark Ingram along with a stout defense, the Saints are the greatest threat tot he Bucs in the NFC South.  I still feel they will finish second in the division, but they should make the playoffs and after that anything can happen.

Carolina Panthers – The Panthers traded for Baker Mayfield in the offseason, hoping he could be the answer to their QB situation.  Baker competed with Sam Darnold for the starting position during the preseason wining the job with his performance.  Baker will have Christian McCaffrey as his lead back, Rashard Higgins and DJ Moore as his main targets at WR, and after that, the talent level on offense deteriorates from there.  the Panthers wont be very good, and baker will not be able to carry them very far this season.  The most exciting game this season will be week one, when baker faces his old team, MY Cleveland Browns in Carolina.  After that, The Panthers will have a disappointing season, finishing third in the division.

Atlanta Falcons – The most significant pickup for the Falcons in the offseason was QB Marcus Mariota, the former first round draft pick out of Oregon.  He wil be their starter for 2022 but waiting in the wings is Desmond Ritter their first round draft pick out of The University of Cincinnati.  If Mariota falters during the season, expect to see Ritter step in as the starter the remainder of the season.  The Falcons do have high-level talent beginning with star TE Kyle Pitts and RB/WR Cordarrelle Patterson, who is more like a swiss army knife as far as a weapon is concerned.  Despite all that, the Falcons will not be good enough to get out of the cellar of the NFC South this season and they will finish last.