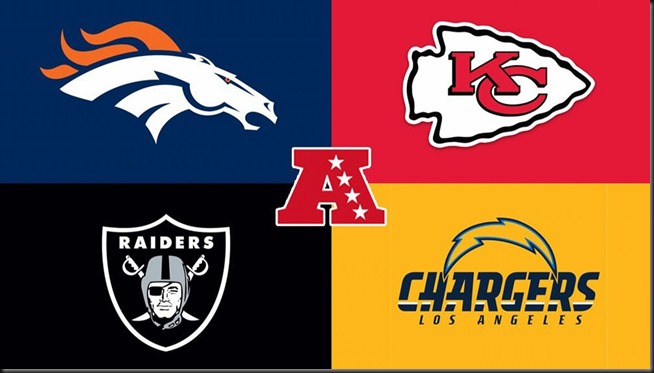 Day Eight of the “Division Prediction Marathon” brings us to the LAST division in my series, the one that will be the hardest to predict, the one where the winner could be almost any of the four teams in the division.  All have Special talent at key positions, all have great defenses, and all have an elite QB at the helm of the offense.  We’re talking about the AFC West, the best division in the NFL, so say all of the experts.  Well I am NOT an expert, but even I agree this is the best division in football.  (Yes Footies in Europe and around the world – FOOTBALL…)  It’s pure American, and as much as you may HATE America, it is the #1 sport over here in the west, and we love to watch it, we love to play it, and we love to talk about it.  We feel it is the greatest sport in the world and because we are arrogant  “yanks”,  we will not allow any discussion to the contrary.

Los Angeles Chargers – wait…  what? The Sports Nerd is choosing the Chargers over the Chiefs???  Yes, I am…  The Chargers have a better running game, they have a better WR corps, and most importantly, they have a better defense than the Chiefs.  Justin Herbert, Austin Eckler, Keenan Allen, Mike Williams…  all more talented than what KC can bring to the table (except maybe Mahomes – MAYBE).  Herbert is ready to take this team to the next level, and I don’t doubt they will be successful.  Joey Bosa, Khalil Mack, Kyle Van Noy, Derwin James, Asante Samuel Jr, all top tier defenders, the Chargers defense is no joke and I really think they will cause havoc in opponents backfields this upcoming season.  The Los Angels Chargers will WIN the AFC West.

Kansas City Chiefs – The Chiefs will fall a bit this year, but not THAT much.  Despite the loss of Tyreek Hill in the offseason to the Dolphins, the Chiefs have arguably the SECOND best QB in the NFL in Patrick Mahomes, after Josh Allen.  Yeah Josh is a better QB, and I will die on that hill…  The Chiefs replace hill with JuJu Smith-Schuster from Pittsburgh and Marquez Valdes-Scantling, along with Justin Watson from the Buccaneers.  The only returning WR on the roster from last year is Mecole Hardman, so Patrick will have a whole set of new targets to throw to, not saying these guys are exactly elite.  They still have Travis Kelce, but he will spend so much time under double team, Patrick may have to get more creative than ever to hook up with his other options.  They do not have a top-10 defense, in fact both Los Angeles and Denver have better defenses in the division, and I feel a lot of teams will be able to score on them.  The Chiefs finish second in the division, but still make the playoffs.

Denver Broncos – It was difficult picking between the Broncos and Raiders for the third spot in the division, but I feel the deciding factor is Denver’s defense and Russell Wilson.  Wilson, acquired in the offseason from the Seahawks via trade, will inject new life in to the offense that barely managed to get out of its own way last season with Drew Lock at the helm, who ironically, is now in Seattle.  Having Jerry Jeudy and Courtland Sutton to throw too gives Wilson some pretty good targets.  Melvin Gordon and Javonte Williams make for a pretty good backfield in the running game (Key Fantasy Football advice…  do NOT draft Gordon, TRUST me) and Wilson wil have something he didn’t have in Seattle…  an offensive line.  Denver has one of the best defensive lines in football, so he will see more protection than he ever had in Seattle since their Super Bowl years.  Bradley Chub, Randy Gregory, Patrick Surtain, some of the best defenders in the league.  All things considered if the Broncos go on a roll, they could compete with the Chiefs for that second spot in the division.

Las Vegas Raiders – So I finish up this series with the Las Vegas Raiders…  I’ve been to Vegas ONCE in my life…  2008 for a week.  Nice place to visit but I wouldn’t want to live there.  Between all of the guys on the sidewalks on the strip handing you flyers for calling a hooker, the money trap that is the casinos, and the fact I did not win crap on the slots…  I have no desire to go back, but I digress.  The Raiders are a really good team, besides me picking them to finish last in the division.  I firmly believe that 9-8 could be the record of the last placed team in the division.  The problem is that this division is so good, even the Raiders could finish last and still have a better record than some second place teams in other divisions and quite possibly one or two division winners.  (AFC South & NFC East) Derek Carr has a new weapon in Davante Adams, picked up in the offseason with the Packers, Hunter Renfrow is also a high end receiver and Daren Waller is one of the best TE’s in the NFL.  Josh Jacobs is a top-level running back so Carr has a ton of weapons, but I just don’t think it is enough to overcome the other teams in the division.  I just don’t feel that the Raiders have the horsepower to compete in the division and that is why I pick them to finish last.

So ends the “Division Prediction Marathon” by The Sports Nerd.  I hope this series has given you a glimpse of the upcoming season and whether or not you agree with what I have predicted, I thank you all for reading what I have had to say.  I have NEVER written one post a day for eight days straight before and as I told @jongolson the other night this series has given me a new outlook on where I am going as a writer.  Look for more posts as the season progresses and I may even post my predictions on the playoffs and Super Bowl 57 in the coming days.  Right now…  I need to rest my fingers.  thanks all…