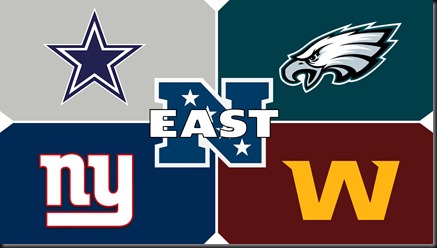 Continuing my series on previewing the 2022 NFL season, tonight I predict the NFC East.  This division includes The Dallas Cowboys, Philadelphia Eagles, NY Giants, and the Washington (uggh) Commanders.  It has a lot of NFL History with a total of 13 Super Bowl Wins in its history.  Dallas with 5, NY Giants with 4, Washington with 3, and the Philadelphia Eagles with 1.   Below is my  preview of this division for 2022.

Dallas Cowboys –  Dallas has been the brunt of the “can’t win the big one” Memes you’ve seen on the internet.  Dallas hasn’t won a championship since 1995, and have not won many playoff games since that last championship, despite having high-level talent.  Dak Prescott will lead this team in his seventh season out of Mississippi State.  Dak has shown a lot of promise since he was drafted, but he just can’t seem to get them over the hump and go deep in the playoffs.  Despite all this, hopes are once again high in Dallas, with their all-star QB, power running game and vaunted defense.   Owner jerry jones is hoping he can get the “Jimmy Johnson” monkey off his back, but alas, I don’t believe it.  This division is going to come down to two teams…  Dallas and Philadelphia.  despite my reservations I give the Cowboys the edge in the division and will come out on top just BARELY over the Eagles.

Philadelphia Eagles – The Eagles got some weapons in the offseason, including wide receiver AJ Brown in a surprise trade with the Tennessee Titans this past offseason.  Brown promises to be WR#1 and the primary target of QB Jalen Hurts, in his third season out of Alabama and his second season at the helm of the Eagles offense.  The Eagles may be leaning on the run game more this year with Miles Sanders and newly acquired (Today) Trey Sermon from waivers after he was released by the San Francisco 49ers.  This season wil be a make or break year for Jalen Hurts and will be his proving ground for whether or not he can be the franchise QB for the Eagles, something they have been looking for since Donovan McNabb retired.  I think the Eagles will battle it out with the Cowboys for the division but just fall short, settling for a Wild Card Playoff spot in the NFC.

New York Giants – The Giants have a new head coach in Brian Daboll, recently with the Buffalo Bills.  Daboll will insert a shot of renewed hope with the Giants and there are signs that they will rebuild and be a better team than they were compared to last years team.  They are still going to ride with Daniel Jones as their QB and in this fans opinion, this will e the make or break year for Jones.  Saquon Barkley is healthy, they added WR Kenny Golladay last year and he promises top be their key receiver this season, along with Sterling Shepard, Darius Slayton, Kadarius Toney, and David Sills.  The giants were 4-13 last season, but this season I feel they will be better under Daboll.  Not much, but better.

Washington Commanders – New name… same owner…  that’s al I really have to say.  Daniel Snyder is the worst owner in the NFL and he doesn’t care about winning, only about how much money he can make each season.  The “Commanders” acquired Carson Wentz in the offseason, the poster child for unrealized expectations at QB.  Ron Rivera is a great head coach, but he is at the mercy of an ineffective front office and an owner that just doesn’t care.  They will already start the season without All-Pro DE Chase Young for the first 4 games due to still rehabbing his torn ACL & MCL in November last year.  Questions remain to see if RB Antonio Gibson can return to form and if Terry McLaurin can carry the WR corps along with Curtis Samuel and others.  The biggest question mark is Wentz…  will we see good Wentz or bad Wentz…  My prediction is that this will be Wentz’s last stand, and the Commanders will finish last in the division, possibly costing Rivera his job.

Thanks for reading and I don’t expect many to agree with what I predicted, but after all, no one can accurately predict what will happen in any given division in August/September before the season starts.  It’s a crap shoot, and everyone is 0-0.  Stay tuned tomorrow night as I preview the NFC West.  I am sure Eliot will have a LOT to say after that post… lol.