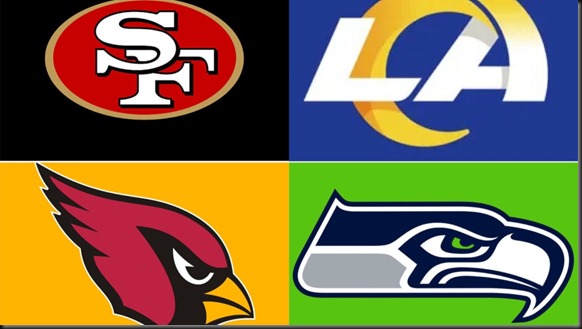 Day three of what I like to call the “division prediction marathon” brings us to the NFC West..  In this division we have the Los Angeles Rams, The San Francisco 49er’s and the Arizona “Hail Murray” Cardinals.  I have heard some say this is the best division in the NFC, and to be honest, it is pretty good, with three teams in this division having the chance to win it (Sorry Seattle) but I don’t know yet, I am still on the fence on how good the teams are in this division.  Lets get going, this one is for Eliot Lomba, co-host #3 on the list, but (possibly) #1 on my co-host list.  (not really, I don’t rank my friends).

Los Angeles Rams –  Coming off their Super Bowl victory the Rams are the team to beat in the division.  Until they are knocked off, they will still be my favorite to win the division, as the have most of their team back for 2022.  Matthew Stafford, after languishing in Detroit for all of his career with a front office and ownership that didn’t care about winning, finally got a taste of what a successful franchise is really like.  I was very happy for him, and even more happy that the Rams beat the Bengals, a hated rival in the AFC North and The Browns (AFC North prediction coming tomorrow).  The Rams will win this division again, beating out their fiercest rivals, the 49ers.  Honestly I don’t see them repeating (That blog is coming later) but with the ability of Stafford and that receiving corps along with the defense and Aaron Donald, they should once again win this division.

San Francisco 49ers – This team is loaded with Talent…  From Nick Bosa, Deebo Samuel, George Kittle, and yes, even Trey Lance I still don’t fee they are ready to take over the division.  The question mark in my eyes is Lance…  he is a great talent, but this season will be the first for him to start full time for the 9ers and with the re-signing of Jimmy Garoppolo yesterday, Lance will be looking over his shoulder, whether on purpose or not.  They’re gonna have to get past the Rams, and although they were able to do that during the regular season, it is yet to be seen if they can do it in the playoffs.

Arizona Cardinals – The Cardinals are counting on Kyler Murray to take that next step and be the guy to lead them to the promised land.  With targets like Marquise “Hollywood” Brown and DeAndre Hopkins Murray should… wait… just a minute… oh RIGHT..  Hopkins is suspended for the first six games of the season…  so… there’s that.   Still, they have Zach Ertz in his 10th season, A.J. Green in his 12th season…  and a bunch of nobody’s to throw the ball to before Hopkins comes back.  They have James Connor as their primary back, which is ok, but he hasn’t exactly shown elite status as an NFL Running Back.  Then, there;s the defense…  Led by J.J. Watt, one of the most injured DE’s in the NFL in his 12th season and not much else…  I foresee trouble for the Cardinals on defense.  I’m not sold on Murray, he is 5’ 10” if that, and despite his mobility, I still question he can get the ball downfield and be the leader of this team.  Just not a fan of him and feel he is overrated.  The Cardinals will finish 3rd at best in this division and will miss the postseason.

Seattle Seahawks – What can I say about Seattle?  They trade Russell Wilson to the Denver Broncos, they release Bobby Wagner and it appears that they are working to rebuild post Pete Carroll.  I predict the Seahawks will play to get a high draft pick next year in a QB rich draft so they can move towards molding their future around a new franchise quarterback.  I believe Carrol is done after this season and they bring in a coach that will pick the future of the franchise.  The Hawks finish last in this division under the ageing Pete Carrol, Geno Smith, and Drew Lock waiting in the wings.  Not even the physical specimen DK Metcalf or the versatile Tyler Locket wil be able to help this team…  and TE Noah Fant? he’s gonna miss Denver so bad this year…

Tomorrow is the Big one…  The AFC North…  be ready, I’m not going to be biased on this one…  I may actually shock a lot of you.  Stay tuned…

Join me and my cohosts @jongolson, @scubatexan, and Eliot “Big E” Lomba each and every Sunday night at 7:30 PM Eastern time for The Sports Nerds!  90 minutes of sports talk, trash talk, and laughs as we discuss the week in sports.