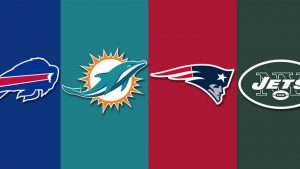 I’m gonna do something that entails a little risk…  I am going to spend the next 8 days previewing and predicting the outcome of the 8 divisions in the NFL.  The catch…  I wont do any research on the usual suspect sites, I wont quote them, I wont use their words, I will do this off the cuff, as nature intended.  Some of you wont like what I have to say, some will call me nuts and I have no idea what I am talking about, and other will call me “Captain Obvious”, but I’m going to do it just the same.  I am going to first focus on the four divisions that impact our Sunday Night Panel, beginning with the AFC East, which houses the Buffalo Bills, the favorite team of @jongolson, as well as The New England Patriots, NY Jets, and the Miami Dolphins.

So…  Let’s get this party started…

Buffalo Bills –  the odds-on favorite to not only win this division, but the favorite to represent the AFC in the Super Bowl this year.  The Bills have shorn up their defense and they have quite possibly the best safety in the NFL in Micah Hyde, the undisputed leader of the defense.  Add to that one of the best offensive lines in the NFL, a fully stocked wide receiver corps and of course, the best QB in the NFL in my opinion and the Bills are the class of the division, no other discussion is needed.

Miami Dolphins –   The Dolphins added Tyreek Hill to their roster to give Tua a world-class WR to throw to.  That’s all fine well and good, but Tua isn’t proven and he is still rough around the edges.  His ability to throw the long ball is in question as is his accuracy.  The Dolphins are the up and coming team in the division, they have a lot of talent and I expect them to finish second in the division.  the Tua to Hill combo may just be the difference between finishing ahead of the Patriots or just behind them.

New England Patriots –  The Patriots continue to try and find the magic they had when Brady was the king of all of the NFL and Belichick was lauded as the second coming of Vince Lombardi.  I got new for you NFL fans, it wasn’t Belichick that was responsible for the Patriots success, it was all Brady.  The truth will come out this season when the Pats finish third in the division and Mac Jones is revealed as the fraud that he is.  The Pats will finish 9-8 or 8-9 and will miss the Playoffs for the second time in three years.  The last time that happened, was when they missed the playoffs 3 out of four years from 1999-2002.  The dynasty is over, and the departure of Tom Brady is the reason for that.

Ok so that’s the first of eight divisions…  tune in tomorrow when I cover the NFC East, and my outlook for Ken’s Dallas Cowboys…