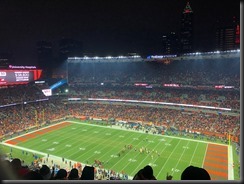 Philadelphia @ Tampa Bay – This wasn’t even a contest.  The Bucs jumped out to a 31-0 lead by the end of the third quarter and Philly had no hope of catching up as the Buccaneers defeated Philly 31-15 in a game that wasn’t even as close as the score reflects.  Jalen Hurts showed his inexperience by throwing 2 interceptions and showed his inexperience as the Bucs defense harassed him the entire game.  The Bucs finally showed who they are, and that is the defending champs.  the defense seems to have finally come together for the playoff run and they will be facing the Rams, who beat them earlier in the season in LA.  Tom Brady is the GOAT, there is no dispute, and he showed it on Sunday, throwing for 271 yards and two scores, while not turning the ball over.  Despite not having Leonard Fournette or Ronald Jones, the Bucs running game was effective against the Eagles.  Racking up 106 yards on the ground and two touchdowns.  No surprises here, and really no excitement, as the Bucs dominated right out of the gate and never looked back.

San Francisco @ Dallas – Wow, I have so many thoughts on this game that this short paragraph may not have enough room for.  The cowboys, once again had been predicted all season long as the team to beat in the NFC, despite the dominance of the Packers against all of their opponents this season.  Dak was hailed as the comeback player of the year, Zeke Elliott and Tony Pollard the “best one-two punch” in the NFL, while also touting the skills of defensive stars Trevon Diggs and Micah Parsons.  The Cowboys fell flat, Dak was harassed all game long by the aggressive Niners defense and believe it or not, Niners QB Jimmy Garoppolo really only made one big mistake in the game, a late interception by Anthony Brown when Jimmy overthrew his intended receiver.  Outside the fact that the Cowboys gave up 341 yards, allowed two rushing touchdowns to Deebo Samuel and Elijah Mitchell, despite the fact that Dak threw for 254 yards and a TD (along with an INT) and STILL lost,  the most BONE-HEADED sequence happened at the end of the game.  With 14 seconds left and no timeouts from the San Fran 41 yard line the ‘Boys called a QB DRAW where Dak ran for 17 yards, but failed to understand the rules in that after he slid at the 24 yard line, he did not hand the ball to an official, which is REQUIRED, and instead handed the ball to his center to place the ball in order to prepare for a clock-stopping spike to allow for one more play.  The official ran into the line and did what he was supposed to do, place the ball where the line of scrimmage is supposed to be, but by the time the ball was snapped the clock had already run out and the game was over.  This sequence is a result of Head Coach Mike McCarthy having bad game-management skills (something he showed time after time in Green Bay) and the fact that the starting QB of “America’s Team” did not understand the rules.  As a footnote…  Dallas did not beat any team all season with a double digit win total…  can you say that they had been overrated all season?  I think so…  Sorry Ken… in the words of Denny Green…  The Cowboys were who we thought they were…

Pittsburgh @ Kansas City –  I’m gonna make this short and sweet… Big Ben’s last game will go down as one of the most lackluster performances of his entire career.  He showed his age, he showed that he needs to retire and he showed that he was unable to draw from his HOF (puke) career and be competitive against a clearly superior team in the Chiefs.  Ben threw for 215 yards and two TD’s and the Steelers managed just 56 yards rushing between 3 different ball carriers.  After a punt-fest in the first quarter, the Chiefs woke up in the second and rattled off 21 unanswered points to take a 21-7 lead at halftime.  they never looked back and now they will welcome in the Buffalo bills next Sunday night in prime time…  The only question that remains is…  Will @jongolson show up to do our Show?  or will he decline and decide to focus on the game.

Arizona @ LA Rams – Another game that wasn’t even close.  Matthew Stafford gets his first postseason win of his career and the Rams roll the Cardinals in the last game of the “weekend” on Monday night.  The Rams took a 21-0 lead into halftime and held Kyler Murray to 137 yards passing, just 6 yards rushing, and intercepted him twice in a dominating 34-11 win.  Kyler could never get going and his inexperience showed heavily against a veteran Rams defense.  The Rams now have to face the Bucs, in Tampa, and this promises to be a dogfight, both teams are pretty even on both sides of the ball.  the Rams did manage to win their last meeting earlier in the season, but this is a different Bucs team and they are not only playing at home this time but they seemed destined to once again make it to the NFC Championship.

Hope you enjoyed my “recaps” this week.  Please remember to Join me, @jongolson, Ken Costlow, and Eliot “Big E Lomba each and every Sunday night for The Sports Nerds, where we cover mostly the NFL, but we also cover all major sports in the USA, including MLB, NHL, and the NBA.  WE are Live at 7:30 pm Eastern time on Facebook, Vimm.tv, Twitter, and Twitch.  see below for links: