↓
Home→family→So… how was your holiday weekend?

I went into the holiday weekend with optimism, with hope for good times with family, holiday cheer, and reflection on the last 12 months.

What I got instead was sadness and sorrow.

Friday and Saturday were great, got to see family I haven’ seen in a month, and whom I don’ get to see but for the holidays.  Then comes Sunday morning… Christmas Morning.  I was perusing Facebook and came across a post from my nephew in Ohio.  This is the son of my middle sister, he was born the last year I lived in Ohio and has a daughter, a wife of 8 years, and two step-daughters in high school.  The girls are active in school to include being very talented members of the school volleyball team.  One of them has even been recruited by Hiram College, which ironically, happens to be the school where my mother worked for 11 years in the athletic department.  I grew up in the 70’s as sort of a “mascot” for the Basketball and Football teams as a kid, making this recruitment very special to me.  His wife, Lindsey, was diagnosed with Lupus before they met and has been battling the disease for years.  she is a fighter and had shown some progress over the years, but recently, she was re-admitted to the hospital and sadly, she passed away Christmas morning from the disease…  she was 41.  My heart is breaking for my nephew and their three girls.  I have no words to describe it, just that I am sad and wish I was in Ohio right now to console him and give him whatever he needs at this time.  Please keep him and those wonderful girls in your thoughts, they need it right now.  I never met her, but I kept up with them through social media…  they were such a close and happy family, this is tragic and devastating to not just him and the girls, but to the entire family.

The other is my beautiful Tazzy…  I got her when she was 8 weeks old.  I was working at a car dealership in 2006 and she was the runt of a litter of kittens that were born on the dealership property, what I called a lot kitty at the time.  She called out to me and I could not resist bringing her home.  She remained with me through good times and bad times, 5 moves, including the move from Clearwater, Fl. to Polk county.  that was a move of over 60 miles, and she, along with her adopted brother Simon, who passed in 2015, was forced into a family with two other cats and hilarity ensued.  it was a lot of fun to see the interaction between all four felines and provided hours and hours of entertainment for my wife and I.  The marriage ended in 2011 and I was again alone with just Tazzy and Simon.  Two moves later and we arrive in my current domicile and Tazzy was by my side the entire time.  I introduced a new kitty to the mix in 2016 and Tazzy was not at all thrilled about the situation.  the two never got along and I had to keep them separated, in order to maintain a cohesive unit.  I went to Melbourne this weekend for the holiday weekend, but it was with heavy heart, because she had been failing in health over the last few weeks and I was afraid the end was near for her.  I came back from the holiday this morning and when I got home, she had already passed away.  Her death leaves a huge hole in my heart and it will take time for me to get over the fact that she is gone.  Rest well baby girl…  Thank you for being with me for some of the best and worst years of my life. 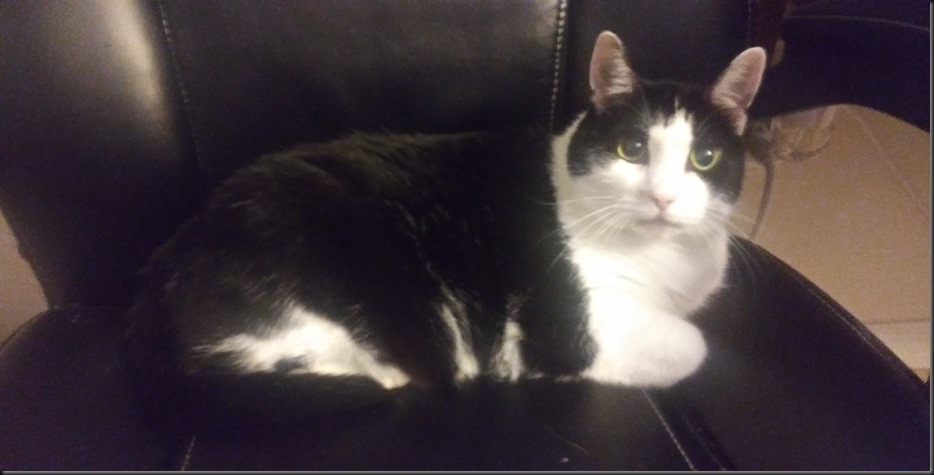 Thanks for reading…  Happy Holidays, and hug your family members and  fur babies tonight.