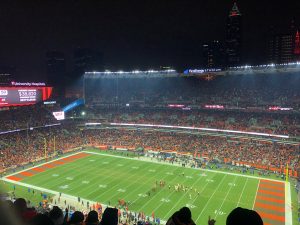 I wish I was more eloquent with my ability to express my thoughts.  I am pretty plain spoken, make is simple and for the most part unable to go deep into my thoughts because they are mostly scrambled a lot of the time.  Today was a big day in the world of Cleveland sports as Deshaun Watson’s punishment finally came down from former Federal Judge Sue Robinson today and I have to say, I am disappointed, yet oddly enough I am not surprised by the decision.  I expected this, because the NFL has a history of not caring about women, a history of coddling and enabling domestic violators in the past, and that history is what determined the light sentence that Robinson handed down today.  She went by the guidelines of what has been done in the past regarding these situations and in doing so, did nothing to prevent it from happening in the future.  Players see that they can get away with sexual harassment or assault and only risk losing about a third of the season as punishment.

She said in her report that the NFL successfully proved every single accusation that they put against Watson.  The offenses were egregious and disgusting.  He is the textbook definition of a sexual predator, he is a danger to the public and he is not deserving of wearing the Orange and Brown.  Besides Watson himself, I blame the Houston Texans for arranging and enabling his behavior, his agent for looking the other way, the Texas legal system for being inept in not charging him, Jimmy Haslam for going after and signing him, Andrew Berry, GM of the browns for going along with the trade, and lastly, Kevin Stefanski, Head Coach of The Browns, for not being more vocal on the whole situation.  I mean… all three of these guys have daughters…  how would they feel if this happened to one of their children?

Here are some quotes from Robinson in the report:

Robinson wrote that the NFL “carried its burden to prove, by a preponderance of the evidence, that Mr. Watson engaged in sexual assault (as defined by the NFL) against the four therapists identified in the Report.” (The Athletic)

“Although this is the most significant punishment ever imposed on an NFL player for allegations of non-violent sexual conduct, Mr. Watson’s pattern of conduct is more egregious than any before reviewed by the NFL,” (The Athletic)

Robinson also recommended a mandate that Watson limit his massage therapy to “Club-directed sessions and Club-approved massage therapists” the rest of his career “as a condition to his reinstatement” and that the quarterback has “no adverse involvement with law enforcement, and must not commit any additional violations of the Policy.” (The Athletic)

In Robinson’s ruling, she noted that one of the aggravating factors in determining Watson’s discipline was his “lack of expressed remorse.” She noted that among the mitigating factors were him being a first-time offender and his “excellent reputation in his community prior to these events.” (ESPN)

All this and yet he still only got six games.

I am disgusted, I am sick, and I at this very minute I am ashamed to call myself a Browns Fan because of how the franchise has treated this entire situation.  I had hoped ownership and the new front office/coaching staff had gotten past all the drama after the Hue Jackson/Gregg Williams/Freddie Kitchens fiasco and that the new regime would turn the franchise around from it’s past stigma as an embarrassment to the NFL.  No Championships since rejoining the league in 1999, two playoff wins, a revolving door of starting QB’s, consistent losing seasons year after year, and to top it off, treating the Best QB this franchise has had since probably Bernie Kosar as an afterthought, instead deciding to go after a serial sexual predator, and then trading Baker to Carolina.

As much as I am disgusted with all of this, the sad fact remains I am a die-hard Cleveland Browns fan.  Call me two faced, a hypocrite, or whatever nasty word you can come up with.  My heart will always be with the Browns, and I can’t quit them.  I will root for the Orange and Brown until the day I die, no matter if they go 17-0 or 0-17, I am here to stay.  I have bled Orange and Brown since I can remember seeing my first game on TV, and 50 years later I am still here, and always will be.  It will leave a bad taste in my mouth but I have to stick with my heart.  This will disappoint a lot of my friends (I see you Katie) and will bring a lot of backlash on the show, but thank goodness I have thick skin and have earned my stripes with all of the Browns-bashing I have faced in the past.  I’m used to it, so it is just par for the course.  I will not desert the franchise I have rooted for all of my life (minus 95-98) over this issue.  I told my boss today, a Die-Hard Florida Gator fan (and graduate, I think) that I could no more quit rooting for the Browns because of Watson than he could stop rooting for the Florida Gators because of Aaron Hernandez, and I stand by that.

Good times, bad times, I’m with them til the end…