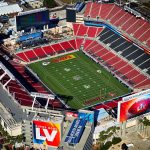 Well here we go, at the time of this writing, it is 46 1/2 hours to kick off in one of the most anticipated Super Bowls in a long time.  The “Goat” vs the “Future Goat” Tampa Bay and Kansas City for football’s ultimate prize.  The Nerds and I have been talking the last two weeks leading up to this game, we all have our own opinions on how it will go down but the fact remains, this promises to be an epic game.  I remember 18 years ago when the Bucs were in the Super Bowl for the first time, I was a die-hard Bucs fan (Browns too) at the time and I actually lived across the street from Raymond James Stadium in a one-bedroom apartment that was part of an old converted military barracks paying $400.00/mo in rent.  The week before I was with my best friend at the time and we went to a local bar and watched the NFC championship game, and boy did we have a blast.  When Rhonde Barber intercepted Donovan McNabb on the 10-yard line and proceeded to take it 90 yards to the house to seal the victory we all went nuts.  Later that night he and I were standing outside the stadium as the team returned from Philadelphia…  (the plane actually did a flyover over the stadium on its way to the airport) celebrating the NFC Championship, it was cold, it was loud and I couldn’t care less. Of course, the Bucs won that Super Bowl vs the Raiders, and I was high as a kite.

THE YEARS THAT FOLLOWED

Fast forward 18 years and here we are again, The Bucs are once again one game from reaching NFL Immortality Sunday when they face probably the most prolific offense in the NFL in a decade, the Kansas City Chiefs.  Patrick Mahomes has in just three years in the league become the face of the NFL and he has shown that he is capable of pulling off magic on a football field, getting passes to receivers that any other QB in the league wouldn’t dream of attempting, along with showing Poise and composure of players 10 years older than he is.  The task is daunting for the Bucs this time around, the foe is better than what they played in 2003, and they are the defending champs.  With all of that being said, here is the Kicker…  I am no longer a Bucs fan…  the post-Super Bowl years soured me on the franchise because of the way ownership decided they no longer cared, the fact that Jon Gruden tore the roster down and tried to make it in the image he wanted it to be, while still trying to get back to the playoffs and win another ring.  Gruden destroyed the roster, he is the type of coach that declares it is his way or no way, and that he was all-knowing and no-one else knew as much about football as he did.  they went 7-9 the following year and missed the playoffs…  they had two more playoff appearances under Gruden, losing in the wildcard round both times.  They then began a stretch of 12 years and six head coaches without a playoff appearance…  until this year.  Over the course of that 12-year stretch, ownership proved time after time that they did not care about the Bucs, as they are also majority owners of Manchester United, the premier franchise in European Soccer.  The Bucs were an afterthought and my loyalty waned and I quit rooting for them because I was disgusted that they did not honor the fans or the franchise itself by not even attempting to put a decent product on the field that could compete.  The Bucs were my adopted team because I lived in Tampa and with their history as bad as it was leading up to that point, it just felt cheap that they were satisfied with just one trophy and didn’t care about going after another one.

So here we are, so many years later and the Bucs have once again found themselves in the Super Bowl,  but it feels different this time.  Why, well I have always been a fan of building a team from the ground up, not going all out in free agency to pick up what I would call “ringers” and this is how I would describe this team.  they went out and got the best QB to ever lace them up, added his favorite target from his New England days just to chance a championship.  Bruce Arians was 7-9 his first season as the Head Coach, he didn’t build anything, he brought a bit of a swagger to the franchise with his fancy hats and his unorthodox way of approaching the game.  They refused to sign the QB they drafted #1 overall after the 2019 season and let him go in free agency to the New Orleans Saints and instead went head hunting aggressively for Tom Brady and his 6 Super Bowl rings in the offseason.  In retrospect, if they win on Sunday this will be one of the greatest free-agent signings in the history of the NFL but it feels dirty, it feels cheap and I would feel guilty as being a bandwagon fan to jump on the Pirate Ship and ride the success to the end with this team.  I watched after they ran up win after win, all because of this player that I have hated for 20 years because I was tired of seeing him and hit Head Coach win 6 Super Bowls…  I HATED the Patriots, and I still do, and I could not bring myself to root for these Bucs because of how they did it in the 2019 offseason.  Then comes the kicker…  They signed Antonio Brown, a player that had burned the Browns for years when he played for the Pittsburgh Steelers in the 2010s.  Brown was a head case, he has been accused of sexual assault, he has no shame, he shows no remorse for any of his off-field shenanigans or acceptance that he is a sexual predator and a disgrace to the league.  I hated that signing and that was the final straw for me.  I made it my personal obligation to NOT root for this team because there was no route or move they would lower themselves to go after players that were hired guns or had no reason to be in the league in the first place.  I actually rooted for them to lose every game, to show that the best way was still to build off the draft and build a culture the fans could be proud of (See the 2020 Cleveland Browns).

SO HERE WE ARE…

With all of the above being said, I find myself in a difficult situation because I hate the Chiefs now more than I hate the Patriots, and believe it or not it is because of ONE PLAY.  Higgins definitely did fumble the ball through the endzone, but what burns me is that the refs missed the helmet-to-helmet hit by safety Daniel Sorensen on Higgins and erased any chance of the Browns comeback win in that game.  It was a dirty hit, he lowered his helmet and the refs missed it.  Because of that, I will once again be rooting for the Tampa Bay Buccaneers to win it all on Sunday.  As much as it hurts, I am rooting for a Tom Brady-led team to win the Super Bowl (hey Tom, how much is too much?) Sunday and even though it makes me feel dirty to the point that if they win I will need a shower afterward to get the stink off me for compromising my principles, Go Bucs…

The Nerds are looking forward to this game as is most of the world, so with that being the case, The Sports Nerds will be broadcasting a special LIVE  Pre-Game edition of our show on Sunday Afternoon 5 pm Eastern time for about an hour to preview and provide our predictions for Super Bowl LV.  I hope you will all join us for trash talk, trivia, and fun shit to get you through the start of the game at 6:30 Eastern.  So fire up the Grill, fry the wings, prepare the dip, and get ready for The Sports Nerds to give you fun and information leading up to Super Bowl LV.  You can watch via Facebook, Twitch, Vimm, and Twitter at 5:00 pm eastern time on Sunday.  Join us for all the fun, I hope to see you…