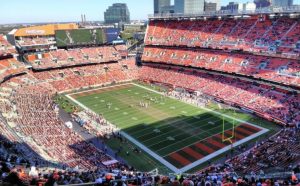 Let me just say, I am hurting, I am disappointed.  The Cleveland Browns, the team I have invested 45 years of my 54 years on this planet were defeated by the defending world champs yesterday 22-17.  The end to the best season in franchise history in over two decades was bittersweet but yes, expected, despite what they had accomplished the entire season.  I truly expected the Browns to lose to KC, knew it was an inevitable result, but what I did not expect was that the worst back seven in the NFL held the Chiefs to 22 points.  Not only that they were in it up til about 4:00 to play in the game, and that shows the determination and never quit attitude this team has shown the entire season.  The number of hurdles this team had to overcome the entire year is unprecedented with COVID, injuries, and everything in between is nothing short of astonishing.

PROMISE FOR THE FUTURE

For the last 21 years, the Browns have not had much to look forward to after dismal seasons, including 33 starting quarterbacks, 12 head coaches, and a litany of below .500 seasons, they seem to have finally found the right guys in both roles that can lead them into the future.  Kevin Stefanski and Baker Mayfield have shown this season to be the right guys at the right time to bring the Browns back to glory.  It seems that the front office and the coaching staff are all on the same page and that they have a consistent goal for this team that will allow the Browns to be a perennial force in the AFC and the NFL as a whole.  I have not felt this good about this team since the 80’s when guys like Bernie Kosar, Kevin Mack, and Earnest Byner lead this team to 3 AFC Championships in that decade.

THANKFUL FOR A SUCCESSFUL SEASON

Despite the loss yesterday, I am hopeful for the future.  The core is in place, and with a front office that is smart and looks to the future, I foresee them being active in the offseason and plug the needed personnel into the defense we can expect the Browns to be a force in the NFL for years to come.  I am disappointed that they lost yesterday, I had high hopes for a Lake Erie AFC Championship since both Buffalo and Cleveland Fans have suffered most of their existence dating back to the 70’s, it would have been fitting and a great storyline for both franchises to meet in the game that would send one of them to the Super Bowl, but it was not to be.  So I go into the offseason with a grateful heart for an amazing 2020 season and excited for what 2021 and beyond will bring to this franchise